I’ve just added a small collection of jewelry items. Many of them feature rainbows or moon phase motifs, so I’m calling it my “Rainbows and Moonbeams” collection. Though to be fair, there are a handful of pieces that don’t really fall into either category.

In any case, there’s a limited selection of new jewelry pieces to choose from, click here to see them all!

This will be my last shop update for the year, and my last shipping date for 2019 will be 12/23 (meaning that you should have your order in by 12/22 if you hope for me to get it out in the mail the next day). After that, I’ll be doing a bit of traveling to spend the holidays with family. The shops will remain open while I’m on the road, but if you order after 12/22, it will not ship until I return in early January of 2020. Click here to see these newest additions to the site! A small collection of new work will go live on the website tonight at 6 pm PST (or 9 pm for those of you on the east coast).

It will include a smattering of mixed media jewelry pieces:

Those little  dragonfly hair accessories that I previewed last week:

As well as a small selection of leather peacock feather hair slides and French clip barrettes: 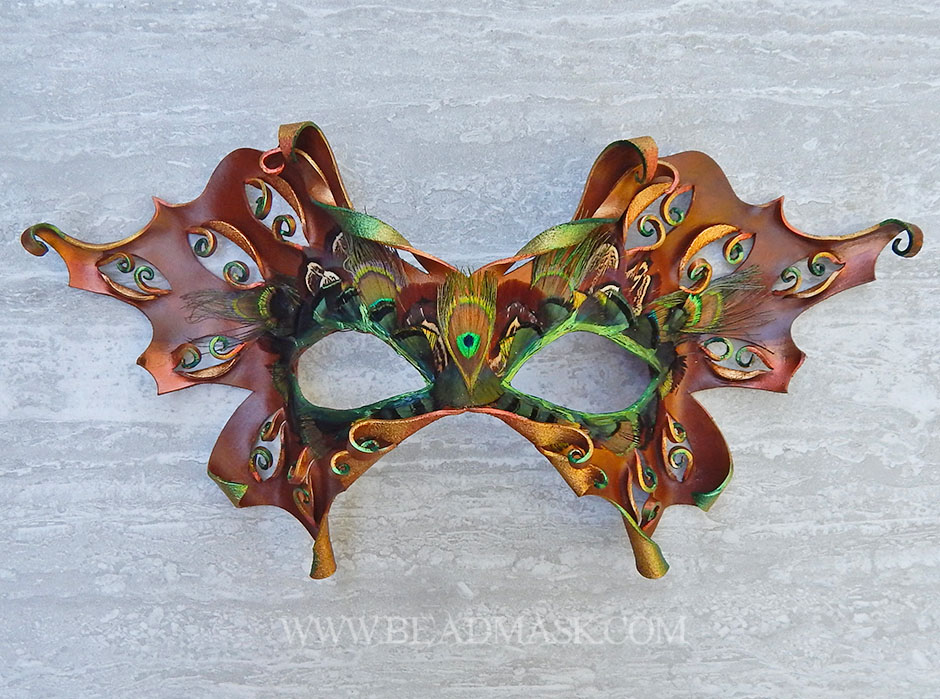 Here’s another recent commission for a feathered moth mask. It went to a repeat client (thank you, I appreciate you!) who already owns a similar mask that I made in olive green. She wanted this one to have more of a steampunk vibe, with rich browns, metallic golds and coppers, and just a bit of green. It’s the first time that I’ve created one of these masks in these hues, and I really like it! Even more importantly, my customer was very happy with it.

Here’s another recent commission that has flown off to its new owner. I love the deep green that she chose, it gives the design a completely different look!

My Pacific Northwest home is surrounded by old growth maple, cedar and fir. We share these woods with many wild creatures, including a family of owls. For whatever reason, they’ve been far more active (and interactive) these last few months. They sing us to sleep at night, and in the mornings we often find evidence of their hunts. Not surprisingly, owl imagery has been cropping up in my work more and more.

Here’s a little preview of some of the leather owl feathers that I’ve been working on lately. They’ll become hair accessories, and you’ll find them (along with other new work) in my next shop update on Monday 8/21.

I finished up all those hair accessories that I posted about last week. Now I’m on the rather tedious step of getting them all photographed. While I’d much rather be creating, this part of the process is not entirely awful. As I crop and edit the photos, I see my work with fresh eyes and find new details.

This one’s my favorite … at least for today. A fantastical peacock feather in shimmering purples and greens, with an artisan crafted wood stick topped with a genuine amethyst point. Very magical, if I do say so myself. You can find it here.

Artchain day 3 (I’m still doing it, just not consecutively 😉 ) I was nominated to post an item of artwork a day for 5 days, and to nominate others…

I’m choosing my “Snow Queen” headdress, because I think it illustrates something important about the creative process: You have to be willing to experiment, take risks and make mistakes.

This piece began as a mask, around 2004. I was going for a “north wind” theme, but the overall shape wasn’t right so I chucked it in the reject pile. Once a year or so, I’d pull it back out and fiddle with it some more. No matter what I tried, it just didn’t fit nicely. It also looked more like an octopus than a cloud spirit, so it kept going back to the reject pile.

In 2012, I decided to give it one more shot. When I realized that there was no way this thing was going to become a cloud, I decided to hack it in half, and turn the top half into a headpiece (the other half is still with me, waiting to become a crown). This piece has been very popular, and I’m often asked to recreate it, or to riff off of the original design… but it’s worth noting that it started out as a “mistake” that I rescued from the reject pile.

This is the 6th version in this series of masks since 2009. Each one is a bit different, but they’re all made from the same pattern. This one is a gorgeous electric blue, accented with peacock, parrot and pheasant feathers in shades of blue, green and bronze. At the forehead is a shimmering green beetle wing, set in a bezel of glass seed beads.